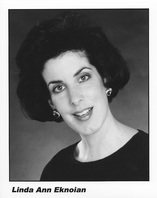 Linda Ann Eknoian  is a multifaceted artist residing in Boston.  She recently earned her Masters Degree in Media Arts from Emerson College and has just completed her first project, Snap Shots of My Life, a documentary short about a local filmmaker. This documentary takes an intimate look at her trajectory from growing up in the projects, to making socially conscious films as an adult and teaching media production to inner city youth.   Linda is also producing and directing a feature documentary, In The Line of Duty, focusing on the Boston Fire Department, Division One.  The film will explore the life in the fire house and what it takes to be a firefighter. She is currently in pre-production for this project.  Linda recently participated in the 48 Hour Film Project, in Boston, Massachusetts.  and was the associate producer, editor and lead role for Haunted In Depth, a short narrative comedy piece, which was partly filmed in 3D.  The film was produced and directed by Don Warnock and shot at the Salem Nightmare Haunted House.  Linda's website is http://lindaeknoian.com/

Awards & Recognition
Linda has received several video and recognition awards for her work.  They include the Hometown Video Festival, Overall Excellence in Public Access, 2005 and 2001, "featured producer" for Rappin' With Linda E!  The Black History Festival 2003 awarded for  Rappin’ with Linda E! – Basketball or Broadway; the Mary Miller Appreciation Award – Dedicated service in public access television in 2008.